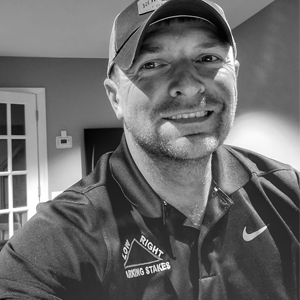 Eric is married with 2 kids and has lived in Livonia, Michigan his entire life. In his free time, he loves to spend time with his family, explore Northern Michigan, barbecue, and watch hockey.

How It All Began

He has been involved with the snow and ice management industry for over 22 years. When he started his own lawn and snow company in high school, he knew he had found his true passion in life. Quality work and excellent customer care are his keys to success. His company grew rapidly over the next 14 years, and when the opportunity arose to sell his company and take on a crucial role at Clippers Landscaping, he took it!

Plow Right had already been around for ten years, selling locally to Southeast Michigan contractors. But, Eric knew there was potential to take the brand nationwide. He built a website in the fall of 2017, and between a ton of social media marketing, expanding the dealer network, and tradeshow appearances, Plow Right has become one of the most trusted, recognizable brands on the market. With the effort of the whole team, Plow Right Marking Stakes has seen amazing growth over the years and is expanding into more and more regions.

A random fun fact about Eric: His father owns a company that travels across the country building bowling centers!